Who “Ticked Off” the Market?

You are here: Home / Current Market Analysis / Who “Ticked Off” the Market?

In case you haven’t noticed, the markets have made a slight turn for the worse.

Some would call it a NOSE DIVE!

Volatility was very slight as the market was moving up, but now that the market has turned down, volatility has increased dramatically.

Note the increase in the range of the bars in a short period of time as the market started moving down on the S&P 500 chart below.

A case could be made for volatility cycles, but they are so irregular that it’s tough to find any meaning or predictability in them.

There’s another, more fundamental, issue that may be causing this increase in volatility, especially since it has been isolated to the downside.

On July 3, the SEC’s elimination of the uptick rule was put into effect.

The uptick rules was established in 1934 and stated that a stock could only be shorted (sold before bought) if its current price was higher than its previous price.

The purpose of the rule was to prevent traders from artificially driving stocks down and then buying them back at lower prices.

3 years ago the SEC began a pilot program in which it suspended the uptick rule for some high volume stocks. The experiment was designed to determine if eliminating the uptick rule would have an overly negative impact on stock pricing.

The results of the pilot program were seen as favorable and so the uptick rule was officially eliminated on July 3rd of this year.

Exchange Traded Funds such as the SPY and QQQQ have never been subject to the uptick rule.

Proponents say that the uptick rule imposed an artificial hindrance on pricing, and that it is best to allow the free market to determine stock prices.

Did the elimination of the uptick rule contribute to the dramatic increase of volatility to the downside in the last month?

A look at the $VIX index shows that this is by far the greatest volatility we’ve experienced in several years.

Perhaps we’ll never know for sure if the elimination of the uptick rule is the cause, but it’s something to keep in mind as we continue to watch what could be a new ability for the markets to move down faster and with less hindrance. 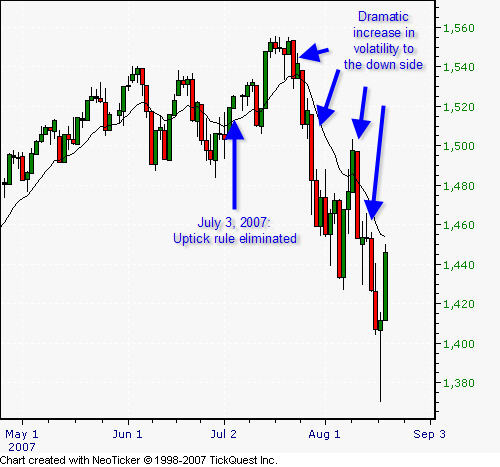